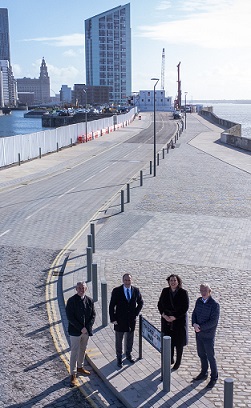 The road leading to the Isle of Man Ferry Terminal in Liverpool has been named Triskelion Way by Liverpool City Council.

The name was chosen to mark the journey being taken by passengers travelling to and from Manx shores while acknowledging the Island’s historic maritime link with the city and wider area, and reflects the significant investment being made by the Isle of Man Government.

‘Providing a Manx connection to the name of the road leading to our new ferry terminal is an extremely thoughtful gesture and one which I’m sure will be appreciated by travellers for many years.

‘The Isle of Man, of course, holds a strong shared history with Liverpool and I’m sure this will only reinforce residents’ affection for a city which many regard as a real home-from-home.’

Mayor of Liverpool Joanne Anderson, who lived in the Isle of Man in the 1990s, said:

‘I’m very pleased that Triskelion Way has now been officially named. This road is a new symbol of Liverpool’s special relationship with the people of the Isle of Man and it will help to connect families and friends for generations to come.

‘The new ferry terminal is a very welcome investment in the city’s north docks by the Isle of Man Government and I wish it every success when it opens next year.’

‘It is fantastic to see the Isle of Man ferry terminal taking shape, and we look forward to the project completing and passengers enjoying state-of-the-art facilities in a new building that will serve generations of travellers for years to come.

‘Not only is this project vital to the Isle of Man and the City of Liverpool, but it also connects Princes Dock to the emerging Central Docks and plays a key role in the wider regeneration of Liverpool Waters.

‘This new road, Triskelion Way, joining with the recently adopted Jesse Hartley Way, are part of a range of critical infrastructure projects being delivered across Central Docks. With our partners we are investing in active travel infrastructure, public realm and new green space, paving the way for the delivery of an exciting new neighbourhood with thousands of new homes alongside leisure, community, commercial and retail space.’

The ceremony formed part of a two-day trip to the North West by the Chief Minister, which included meetings with Metro Mayor of the Liverpool City Region Steve Rotheram, Mayor of Greater Manchester Andy Burnham and Henri Murison of the Northern Powerhouse Partnership.