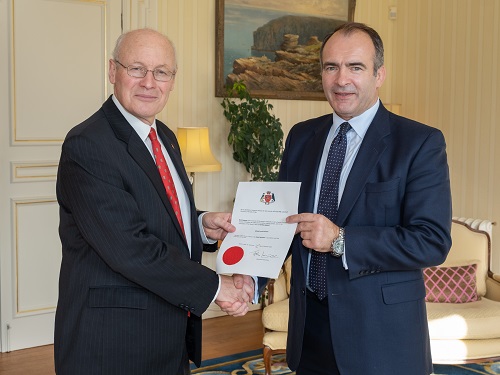 Hon Alfred Cannan MHK has been appointed as the Isle of Man's Chief Minister following a resolution at a special sitting of the House of Keys today.

Mr Cannan, who has been a member of the House of Keys since 2011, has served as the Isle of Man's Treasury Minister since October 2016. He takes over from Howard Quayle CBE who is stepping down.

At a short ceremony at Government House, Mr Cannan was presented with his warrant by the Lieutenant Governor His Excellency Lt General Sir John Lorimer, formally appointing him as the Island's Chief Minister.

Commenting on his appointment, the Chief Minister said: "I am grateful to Members of the House of Keys for putting their faith in me to lead our Island forward. Together, I want us to build a secure, vibrant and sustainable future for the Isle of Man. The work to deliver this for our community starts today."

The Isle of Man held a general election on 23 September. Under the Council of Ministers Act 1990 a chief minister must be nominated from among the members of the House of Keys within one month of an election.

An announcement on who will serve in the new Council of Ministers will be made in the coming days.