His Majesty The King

For many centuries the Stanley family (the Earls of Derby) were feudal Kings or Lords of Man, but in 1765 the Island was purchased by the British Crown. His Majesty The King is the Head of State and is Lord of Man.

The Isle of Man is an internally self-governing Crown Dependency and the Crown has ultimate responsibility for its good Government. Whilst His Majesty’s UK Government is responsible for the Island’s Defence and International Relations, the Isle of Man is not part of the United Kingdom and has its own Manx Law under which it passes Acts of Tynwald and makes its own Regulations (as Primary and Secondary legislation). The UK Parliament has paramount power to legislate for the Isle of Man on all matters but it is a long-standing convention that it does not do so on domestic matters without the Island’s consent.

His Excellency The Lieutenant Governor

The King's Personal Representative on the Isle of Man is formally styled the Lieutenant Governor and is appointed by Warrant of His Majesty The King, following the recommendation of the Isle of Man Selection Committee led by the President of Tynwald, Chief Minister, and the First Deemster and Clerk of the Rolls.

The term of office of the Lieutenant Governor is at The King's pleasure but is normally five years. The Warrant sets out the role in broad terms and speaks of the requirement to promote the Royal Family, The King as Head of State and the need to promote the happiness of the people.

Whilst The King and the Lieutenant Governor have certain executive functions, it is considered that all material functions are discharged by the Isle of Man Government as the Head of State almost always acts on the advice of the Council of Ministers.

Changes in the role of the Lieutenant Governor were amongst the most significant of the Isle of Man constitutional reforms during the 20th century. This process continues and it is the wish of the Isle of Man Government that the Lieutenant Governor encourages such change, subject to him being the guardian of the affairs of The King or Crown matters.

In July 2021, it was announced that Lieutenant General Sir John Lorimer was appointed as the 31st Lieutenant Governor of the Isle of Man. Sir John was sworn-in at Castle Rushen in Castletown on the afternoon of Wednesday 29 September 2021. 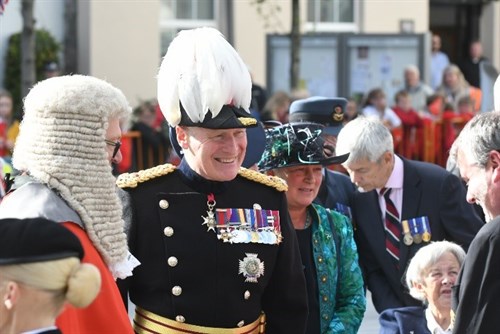 Lieutenant General Sir John LorimerKCB DSO MBE was educated at Marlborough College, Wiltshire and Pembroke College, University of Cambridge. He joined the British Army in 1981 and was commissioned into The Parachute Regiment. He served in all three regular Parachute Regiment battalions and commanded 3 PARA from 2000 to 2003. His service saw multiple operational deployments in Northern Ireland, Iraq, the broader Middle East and Afghanistan.

At higher command, Sir John commanded 12th Mechanized Brigade in Iraq and Afghanistan and 3rd (United Kingdom) Division. He also completed a year-long tour in Kabul as Deputy Commander of the NATO force. He was Chief of Joint Operations from October 2014 until June 2017, commanding all of the UK Armed Forces global operations. His final military appointment was as Defence Senior Adviser Middle East and North Africa, a role he held for three years.

Sir John was sworn in as the 31st Lieutenant Governor of the Isle of Man at Castle Rushen on 28 September 2021.  The tenure for the appointment is five years.

Sir John is married to Philippa. They have three grown-up sons. His outside interests include most sports, especially rugby, skiing, walking and history.

As an Army daughter, Lady Lorimer grew up overseas – in Africa, Germany and Norway. She went to school in Dorset and then went on to read Natural Sciences at Durham University. In 1987, she was commissioned into the Royal Corps of Signals, serving in 30th Signal Regiment and deploying on operations in Namibia with the United Nations and in the Middle East during Gulf War 1. She left the Army after six years to pursue a career in the Defence industry, where she worked for various companies, including the Racal Electronics Group and Exensor UK Ltd, selling and marketing specialist communications and security equipment to the Police, Ministry of Defence and other agencies.

Lady Lorimer has been the Commanding Officer of the First Aid Nursing Yeomanry (Princess Royal’s Volunteer Corps) (FANY (PRVC)) since July 2017. The FANY is a thriving charity, whose all-female volunteers are an essential component of the United Kingdom’s emergency response capability. Members of the Corps are on call 24/7 to provide support to civil and military authorities at times of national crisis.

Lady Lorimer and her husband have three sons in their 20s. Her interests include keeping fit, fly fishing, cross-country and downhill skiing, hill-walking and water sports. She is never happier than when exploring beaches and searching for interesting creatures in rock pools.

The Role of the Lieutenant Governor

There are three overlapping roles: Constitutional, Community and Ceremonial.

The Lieutenant Governor derives his powers directly from the Crown, from United Kingdom Acts of Parliament in respect of certain specific functions (e.g. Nationality); and from Acts of Tynwald or Customary Law. The purpose of the constitutional role is to maintain the legitimacy and continuity of government as this is the foundation of civil peace and order which is maintained by the rule of law.

The Lieutenant Governor has a role to play with certain Crown Appointments within the Church of England on the Island.

State Awards and Honours. After taking advice, the Lieutenant Governor is responsible for making recommendations, on behalf of Isle of Man residents, for Honours that are announced in His Majesty The King’s New Year and Birthday Honours lists. The following link provides more information for individuals considering making an Honours nomination for someone living on the Isle of Man.

After taking advice the Lieutenant Governor is also responsible for the appointment of the Captain of each of the 17 ancient parishes of the Island. This office, normally for lifetime, was first recorded in 1626 to provide Watch and Ward and originated from Norse times in order to maintain ceaseless vigilance to prevent invasion. Formerly the head of the local militia, these days the post is largely ceremonial and recognition of the primary citizen of the Parish. On appointment a Captain takes the oath of office in the presence of the Lieutenant Governor and will receive their badge of office from him. A Captain is entitled to use the letters ‘CP’ after his or her name.

Birthdays and Anniversaries. With prior notification, the Lieutenant Governor sends birthday wishes to Island residents who celebrate their 90th or 100th birthdays, and letters of congratulation to those couples who celebrate their Golden or Diamond (or longer) Wedding Anniversary. The Office of the Lieutenant Governor can liaise with Buckingham Palace on the occasion of Diamond Wedding Anniversaries or 100th Birthdays on behalf of Manx residents. Detailed information can be found at the our Anniversary and birthday cards page.

The Lieutenant Governor takes part in public ceremonies as the representative of His Majesty The King. This role includes such duties as Presiding on Tynwald Hill during the Tynwald Ceremony on Tynwald Day each July, attending the National Remembrance Sunday Service, holding occasional Honours Investitures and hosting visiting Ambassadors and High Commissioners in conjunction with the Island Authorities. Many of the Lieutenant Governor’s community functions also have a ceremonial dimension, such as attendance at the official openings of buildings, addressing conferences, or the launching special of events and appeals.

Neither The King nor the Lieutenant Governor takes an active or initiating role in the executive functions of government. By binding convention, the Head of State almost always acts on the advice of the Council of Ministers.

Contact details for the Office of the Lieutenant Governor

Chief of Staff and Private Secretary

Office of the Lieutenant Governor

Office of the Lieutenant Governor and Government House in Onchan, Isle of Man, IM3 1RR 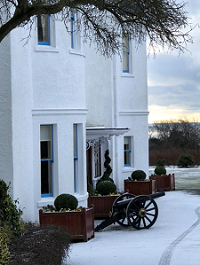 The House was originally Bemahague Farm and owned by the Heywood family. The main part was built between 1820 and 1830 with an extension to its present size in 1904 when the Manx Government bought the House. The maintenance of the House is the responsibility of the Department of Infrastructure who oversee the property through their Estates team. The House has four main bedroom suites, a fifth bedroom, two large reception rooms, and a formal dining room; together with service rooms and a number of offices. 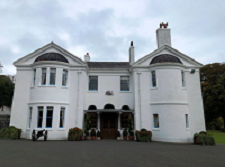 The grounds cover about 12 hectares, some of which is lawn or garden, with much of the rest being woodland or grazing land. There is also a well-established rose garden, orchard, vegetable plots and greenhouses providing flowers, produce and garden plants for the House and Gardens. Many visitors are welcomed to Government House each year, including: foreign Ambassadors, visiting politicians, VIPs and business leaders; and many more people from all walks of life on the Isle of Man. Functions hosted by the Lieutenant Governor and spouse range from formal ceremonies and receptions to teas, lunches and dinners. Organised visits by school groups and youth organisations from across the Island are also encouraged.

The support to the Lieutenant Governor in his official functions is provided by a small, dedicated team of administrative and house staff. They are all Isle of Man public servants and members of the Crown and External Relations Directorate within the Cabinet Office. The Chief of Staff/Private Secretary is responsible for the leadership of all operational aspects of the household and provides direct support to the Lieutenant Governor with their Constitutional duties. The Chief of Staff, House Manager and Social/Engagements Secretary handle all administrative matters, such as maintaining the Lieutenant Governor's diary, assisting with correspondence, speeches, arranging the daily programme and handling the protocol associated with all official events. The House Manager, Chef, Butler/Chauffeur and Assistant Housekeepers look after the House, Kitchen, the Lieutenant Governor's travel around the Island and ensure the efficient running of functions (with the support of a trusted team of casual staff, who supplement the team when required). There are also a number of Honorary Aide-de-Camps (Honorary ADCs) who assist the Lieutenant Governor and their spouse when they are hosting official functions at Government House.