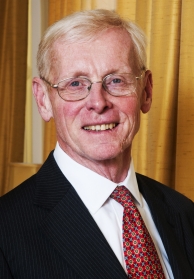 After graduating from St Edmund Hall, Oxford in 1973, Sir Richard Gozney joined the Foreign and Commonwealth Office and went on to have a varied career in diplomacy.

In 1993 he was appointed British High Commissioner to Swaziland. After serving three years in Swaziland he was appointed Head of the Foreign Office Department advising on the foreign policy aspects of defence and then Chief of the Intelligence Assessment Staff.

Sir Richard returned overseas when he was appointed British Ambassador to Indonesia in 2000 and then British High Commissioner to Nigeria in 2004.  In 2007 Sir Richard’s last FCO posting was as Governor and Commander-in-Chief of Bermuda.

Sir Richard has many outside interests and these include bird watching, walking and sailing - all interests he looks forward to enjoying during his term of office in the Isle of Man.

Diana Gozney was born and educated in the UK. She worked for the Foreign and Commonwealth Office for 10 years, including overseas postings in Malaysia, Cuba and Argentina, where she met her husband. She has two sons, both in their twenties. In her spare time she enjoys golf, tennis, walking and getting to know new territories.