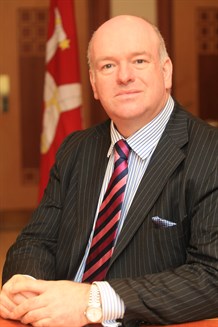 Hon. Howard Quayle, Member of the House of Keys (MHK) for Middle, was elected Chief Minister by Tynwald on 4 October 2016.

Before his election to the role of Chief Minister he was Minister for Health and Social Care.

Mr Quayle began his working life as a civil servant in the Treasury and Local Government planning before moving into the finance sector, working for the NFU Mutual Insurance Group and Clerical Medical.

Eventually he followed his father into farming where he has built up an award-winning herd of pedigree Aberdeen Angus cattle. Mr. Quayle was Vice-President of the Manx National Farmers’ Union for two years before taking over as President, from 2005 to 2010. He was the Union’s public face, involved fighting the industry’s corner at meetings all over Europe, including Brussels and involved in discussions with many Members of the European Parliament as well as the Agricultural Commissioner.